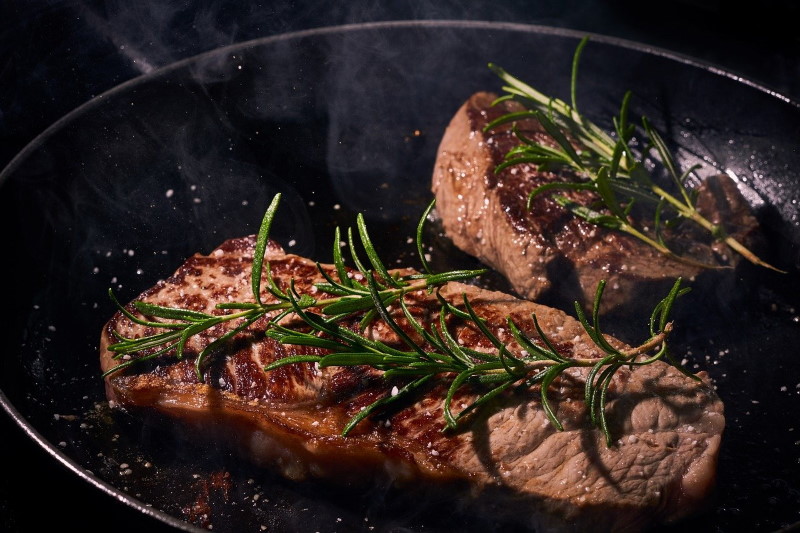 Unlike old non-stick skillets, cast-iron requires a bit more care and attention. So we’re here to share some tips on how to cook with cast iron skillet.

Cast iron skillets are just as convenient for baking sticky skillet cakes because they are for frying bacon and meat. If it is seasoned properly, it works better than a non-stick skillet. So treat your cast iron right, and it could last a lifetime. To help you with this, here are 5 easy ways to cook with cast iron and how to care for one.

Seasoning creates a shiny, easy-release surface and prevents the pan from rusting. Most pans come pre-seasoned, but you should still add a thin layer of cast iron seasoning oil to prevent food from sticking to the pan. You can use peanut oil, almond oil, flaxseed oil, or coconut oil to season the skillet.

Flaxseed oil offers the best non-stick seasoning, but it’s expensive. If you don’t have one in your pantry or you don’t want to spend a lot of money, you can just use canola oil. To season, rinse the skillet with warm water, and then apply oil all over the skillet.

Place the skillet upside down in the oven and let it bake for 1 hour. Don’t forget to pre-heat the oven to 350° before placing the skillet. After an hour, turn off the oven and allow the skillet to cool off in there. Wipe off excess oil with a clean paper towel.

Repeat the process if needed. You can begin cooking once you have achieved that glossy “patina” surface. New skillets should be seasoned once or twice. If it’s an older skillet, you may need to season it a few times.

Cast iron doesn’t heat evenly, but it does keep heat well. Putting cold ingredients in a cold skillet will make the food stick, so always pre-heat the skillet for 5 to 10 minutes before adding any oil or food. Pre-heating the skillet will allow you to cook on a consistent surface immediately.

Brush oil onto veggies or meat before you cook them to prevent oil from flowing into the pores of the skillet. Use tongs to add food to the skillet. Drop and pick it up several times to make the initial sear. Once you’ve created the initial sear, drop the food again, and leave it.

This rule doesn’t apply when you are searing steak. In this case, you need to let the meat sit until a caramelized crust forms around the meat’s edges. Flip the meat once you see that caramelized crust. Remember not to cook anything extremely acidic or smelly in cast iron skillets.

Acidic ingredients like wine and tomatoes will create a metallic flavor, so save these ingredients for another skillet. These ingredients will leave flavors behind, so don’t use the same skillet to cook meat and bake sweets.

Consider buying one cast-iron skillet for savory things and another for sweet things so you don’t end up with a cake that tastes like meat. And since cast iron skillets are oven-safe, you can take the skillet from the stove and transfer it to your oven immediately.

If you love perfectly roasted veggies with a crispy exterior crust, consider replacing your rimmed sheet pan with a cast-iron skillet. A properly seasoned cast iron skillet can fry eggs too. Just make sure that it’s properly seasoned to prevent foods from sticking to the skillet.

Soap won’t do any damage to the pan if it’s seasoned properly. If this method is not working for you, then you can scrub the pan gently with warm water and coarse salt. The salt serves as an abrasive to remove food without causing any damage to the seasoning.

Never use a metal scouring pad or steel wool when cleaning your cast iron skillet. You should use these materials only when you are removing rust from the pan.

After you wash the skillet, dry it thoroughly with a clean paper towel. Once it is completely dry, apply a thin layer of oil all over the skillet. Then, heat the skillet on the stovetop or in the oven to remove excess moisture, as well as prevent rusting.

Cooking with cast iron skillets and cleaning it may seem like a lot of work, but just follow the tips stated above, and your pan will last you a lifetime. If you follow these 5 easy ways, then you shouldn’t have any issues with your cast iron skillet.

Some posts may contain affiliate links. KitchenToolsTips.com is a participant in the Amazon Services LLC Associates Program, an affiliate advertising program designed to provide a means for sites to earn advertising fees by advertising and linking to Amazon.com.