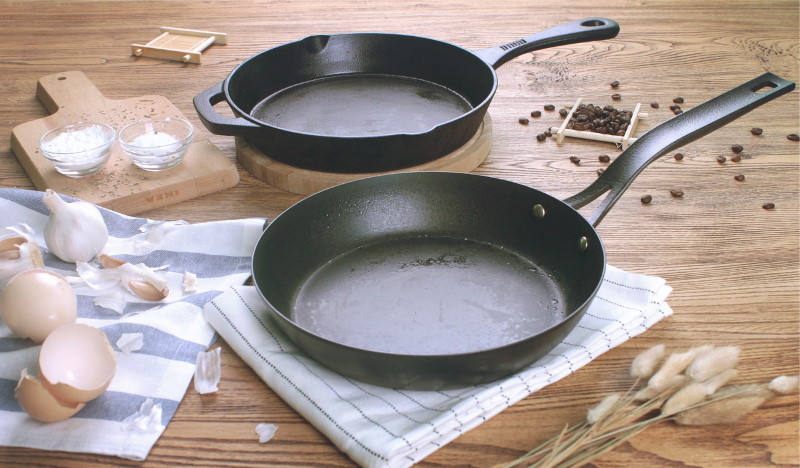 The more you use your cast iron cookware, the thicker the seasoning becomes. But if you want to re-season your pan, then you’ll find everything you need here.

The pan’s seasoning is a thin layer of oil that has been baked onto the cookware. It’s responsible for the pan’s shiny, non-stick surface and protects it from rust. Over time and with frequent uses, the pan will lose this shine. But don’t worry because here are five easy ways on how you can transform your cast iron cookware into a beautiful heirloom with a darker and smoother cooking surface.

Use Cast Iron as Often as Possible

Re-seasoning cast iron is much easier than you think.  The best way to create that precious layer of seasoning is to use the pan regularly. Each time you heat fat or oil in a cast-iron pan, you add a thin layer of seasoning to the cookware. The thin layer accumulates and forms a resilient, shiny surface.

Just make sure to apply a thin layer of oil to the pan. Thick layers of oil will peel off with frequent use, whereas thin layers will last for a long time. Factors such as the stove’s exact angle, how and what you cook, and hot spots on the stove will affect how initial layers of seasoning form.

They will probably appear darker in some areas than others instead of an even layer. Patchy seasoning, however, is a good thing because it allows coats of seasoning to strengthen each other. In the end, what you will get is a durable layer of seasoning that will protect your cast iron for years.

Coconut oil, lard, and other saturated fats are not the best option for seasoning cast iron in the oven. Also, beware of oils that are packed with unsaturated fatty acids like flaxseed oil because the layers of seasoning they produce are susceptible to flaking.

Do you need to season pre-seasoned cast iron pans?

Most cast iron pans today are pre-seasoned, so you can use them right away. They are not completely non-stick, so it’s still recommended that you season your pans before using them. Early in the pan’s lifespan, some proteins may stick to it.

You don’t need to worry because it’s part of the seasoning process. The best way to solve this issue is to cook with your pan often and follow a few simple cooking reminders for your cookware’s first few sessions. Keep these guidelines in mind when cooking with your cast iron pan.

How to Season Cast Iron Cookware in the Oven

Seasoning cast iron creates a layer of protection that grows stronger each time you use the pan. You can do this every time you buy a brand new cast iron pan and re-season the cookware every few years. The ideal temperature for seasoning is just below the oil’s smoke point. For example, if you want to use olive oil, you should bake the pan just below the olive oil smoke point (around 374°F to 405°F).

Preheat the oven to 200⁰F. This will help create a strong layer of seasoning that will last for a long time. In the meantime, heat the pan on the stovetop for five minutes to remove excess moisture. Put the cookware in the oven for ten minutes. After ten minutes, remove it from the oven and increase the temp to 300⁰F. Pre-heating cast iron pans in this manner open the cookware’s pores, allowing it to soak up your preferred oil for seasoning. This will also ensure that the pan is completely dry.

It doesn’t matter whether you have a cast iron wok or a cast iron griddle. You just need to add about ⅛ teaspoon of your preferred oil to season the pan’s cooking surface. Rub the oil all over the pan in a circular motion with a paper towel. Then, get another paper towel to remove any residue.

Repeat the procedure on the handle and bottom with ¼ teaspoon of oil. The cookware should look dry once you are done wiping the excess oil. Remember, you want to bake a coat of seasoning into your pan, so you just need to apply a thin layer of oil to the cookware.

Once your oven hits 300⁰F, place the pan upside down on the middle rack, and bake it for ten minutes. After the timer is up, remove the cookware, put it on the stovetop, and then wipe any excess oil accumulated on the cooking surface. This will be your last opportunity to whittle the layer of oil to a very thin layer before it begins to break down.

Return the cookware to the oven and bake it for one hour at 400⁰F. Do not open the oven while it is baking. Meanwhile, you can read a book or do other chores. After one hour, turn off the oven and allow the pan to sit in there for another hour.

After an hour, take the pan out of the oven, and there you have it! A perfectly seasoned cast iron cookware. You can repeat this process several times, but the best way to develop a shiny cooking surface is to use the pan regularly.

A well-seasoned cast-iron skillet can last a lifetime. The best cast iron seasoning comes from use and time. So if you cook with your cast iron skillet often, you will gradually develop a non-stick cooking surface.

Some posts may contain affiliate links. KitchenToolsTips.com is a participant in the Amazon Services LLC Associates Program, an affiliate advertising program designed to provide a means for sites to earn advertising fees by advertising and linking to Amazon.com.